By GREGORY ZELLER // With a popular diet plan, a new book and a line of beneficial bagels – plus an extensive TV résumé flipping from the “Today” show to “Access Hollywood” – dietician Keren Gilbert is poised for Atkins-level stardom.

Six years ago, she’d have laughed at the notion.

Her husband and business partner, investment banker Jonathan Gilbert, would not have laughed.

“I knew,” he said. “I always believed it. Keren is just too talented.”

But Keren, the public face of skyrocketing Great Neck startup Decision Nutrition and the brains behind its science-meets-sentiment code, would have enjoyed a good chortle. Unexpectedly pregnant with the couple’s third child, the registered dietitcan and certified nutritionist had been feeling professionally unfulfilled for quite awhile.

“After our first son was born (in 2000), not knowing how to handle a career and being a new mom, I started phasing out,” Keren told Innovate LI. “I found it overwhelming.”

Her professional path had already led from Mount Sinai Hospital, where she’d done a residency after earning a master’s degree in nutrition and food studies from NYU, to United Cerebral Palsy, where her nutritionist duties – formulating sick patients’ dietary needs – were particularly clinical. She liked the work, but already knew her future wasn’t in a clinical setting.

A new job in a Glen Cove pediatrician’s office addressed her clinical concerns, but the weight of two young children continued pressing down. Even counseling her friends on nutritional issues, something she’d always done happily, became a chore.

“I kind of let go of the counseling part of myself,” Keren said. “Not consciously. It kind of just happened.”

She acted in some low-budget films bankrolled by one of Jonathan’s hedge funds, just to keep busy, but she’d lost her professional way. Seven years later, pregnant again (“surprisingly”) and still not doing the work she wanted, Keren reached a make-or-break moment.

“I didn’t want to be a lady who just lunches all the time and only has her kids,” she recalled. “I said, ‘I’m not going to let this happen.’”

That decision fuels Decision Nutrition to this day, though Keren is quick to note the name doesn’t refer exclusively to her self-affirming choice.

“I can tell you what to do, but if you don’t decide to do it, it doesn’t matter,” she said. “That’s where it starts. It’s all mental.”

For Keren, it all started with that third pregnancy, which she credits as her greatest professional propellant. Belly bulging, she built the Decision Nutrition website and starting outlining a dietary plan – “conceiving what I was going to do and how I was going to do it,” Keren said. “I found an office, and then the baby was born and I dove in.”

The practice started slowly, but as a handful of early clients slimmed down, word of mouth sped up. 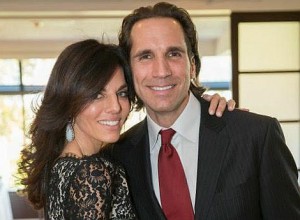 “It was like having a bunch of billboards walking around town,” Jonathan said. “‘You look great, what are you doing? Oh, it’s my nutritionist in Great Neck.’ Within six months, Keren had a pretty large following and some really great results.”

Keren’s HD Diet – a reference to life in a high-definition world, the nutritionist noted, though really, “I just kind of named it that” – is a 12-week plan incorporating “water-loving” hydrophilic foods like oats, beans, spinach and apples. It also sprinkles in a healthy helping of chia seeds, nutrient-dense hydro-boosters native to Mexico and Guatemala. The seeds control cravings and promote digestive health, and yes, they’re the same seeds that grow into your Chia Pet.

An important food crop since the 16th century, the seeds of the flowering plant are currently enjoying a resurgence as a “superfood,” rich in fiber, protein, calcium and B vitamins with low fat content and no cholesterol or sodium.

Keren’s a big fan. She and Jonathan aborted early attempts to create chia-seed nutrition bars, but had more success with their chia bagels. They first sliced a deal with Bagel Boss, a mom-and-pop Roslyn shop that made the bagels for them, with Jonathan distributing from the back of his car. After showcasing at June’s International Dairy-Deli-Bakery Association Food Show in Atlanta, the Gilberts are now chatting with Always Bagels, a Bohemia bagel wholesaler, and are discussing a line of Decision Nutrition products with Deer Park distributor Optima Foods.

With the practice expanding exponentially, Keren – an accredited member of the American Dietetic Association and the Greater New York Dietetic Association – started attracting interest from TV outlets. Again, her husband wasn’t surprised: Not only did her brief acting stints in those low-budget films make her “very mediagenic,” according to Jonathan, but “she’s gorgeous.”

With the startup humming, Keren recognized a new media to conquer. She’d “always dreamed of writing a book,” and a fortuitous meeting with an editor helped organize her thoughts and experiences into “The HD Diet: Achieve Lifelong Weight Loss with Chia Seeds and Other Hydrophilic Foods.” The book dropped in January, delivering a measurable business spike, Jonathan noted.

With their third son now 6 years old, the husband-and-wife duo have also launched a side business: Jonathan, a certified personal trainer, manages Decision Fitness. They’re staking a claim in a crowded industry – weight-loss pills, programs and promises are plentiful – but there’s lots of revenue to go around.

The Gilberts are also partnering with “adventure racing” guru Joe De Sena, the CEO of Spartan Race, a national series of obstacle-course events built around training and nutrition regimens. Keren is penning a second book with De Sena, and the two are designing “HD Spartan Retreat,” a destination fitness/nutrition event.

Jonathan is not surprised by Decision Nutrition’s success – “Talk to me again in a year and Keren will be twice as popular” – but the decision-maker herself still has a hard time buying it. She believes in her diet plan, hydrophilic foods and the power of dedication, but Keren “never really thought it would come this far.”

“Seven years ago, I was really down,” she said. “But I had a really supportive partner.”